Due to the differences in the structure of the many materials mother nature has given us to extract oils from, a variety of extraction methods need to be used.

Essential oils are always extracted from the plant and are sometimes referred to as the 'life force' of the plant as it is the extraction of the very material that gives the plant its taste and smell. One whiff of peppermint oil will tell you that yes indeed, this is certainly a whole lot of peppermint condenced into one small bottle.

Solvents are sometimes introduced to the plant, which removes some of the materials making it easier to extract the oils. This can be a multi stage process, gradually removing impurities with the end result being 100% Pure Essential Oil.

We've left out a few of the less common methods and included all of the main extraction methods for modern essential oils.

Steam Distillation is probably the most commonly used method of extracting essential oils as it works on many types of plants and is also one of the easier methods too. It allows for easy separation of the oil from the plant without too much fuss or steps in between.

For plants and materials that don't easily give up their oils, or have a low extraction rate, the solvent extraction method proves useful. An example of this would be frankincense as it is a hard resin. Solvents are used to separate the essential oils from the target material.

Once the solvents have been applied, a strange waxy material is produced which is often referred to as 'concrete'. From here, alcohol is introduced to further extract and separate the oil from the previously mentioned solvent.

Through this process, the non-volatile plant material such as waxes and pigments, are also extracted and sometimes removed through other processes. If the purpose for the essential oils to be made is for aromatherapy or other modalities that require a very natural non chemical process - then the CO2 method is a great option as no chemicals are used, much like the first steam distillation method listed here. We'll usually be using this for citrus matter, such as lemon and oranges. You'll also find this extraction method is used for some juices found in the supermarket and you'll find they usually taste great! 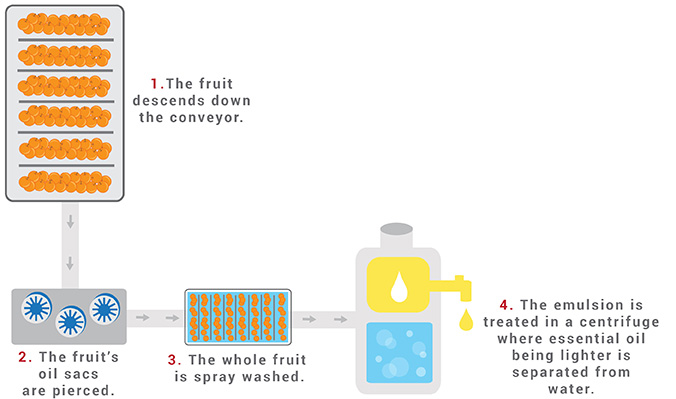 With plants such as roses and oranges, water distillation is normally used. Why? Because with steam distillation they may come together and are hard to separate. This is another example of different process being used for particular plant matter due to the pros and cons of each.

The plants are added to pure boiling water. Pure is used so as to not contaminate the oils with impurities. In this method, the water actually acts as a protective mechanism that prevents the oils from overheating.

After this, it is all cooled down and separated. The essential oil at this point is easy to separate as it doesn't mix with water too well.

Another fun fact is that the left over water is also fairly fragrant itself due to the rather simple nature of this extraction method that leaves some of the oils within the water. From there, the water itself is often sold under the names of 'herbal water, floral water, essential water, or herbal distillate. This is often where 'rose water' comes from!